Ethylene is a gas released by fruit and vegetables due to injury, decay or during ripening. Exposing vegetables to ethylene can result in yellowing, shortened shelf life and increased disease. Ethylene can be removed using scrubbing systems, venting or ozone. The effects of ethylene are reduced at temperatures below 5°C. 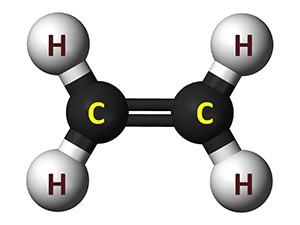 Ethylene (C2H4) is a gas produced naturally by plants. It is particularly associated with ripening of fruit such as bananas, mangoes and tomatoes. These fruit are known as ‘climacteric’ due to the large amounts of ethylene, and marked increase in respiration, that occurs during ripening. Ripening of climacteric fruit can be trigged by treating with ethylene during storage. This technique has wide commercial application, particularly for bananas and avocados.

Ethylene is also released in response to injury, and during rotting/composting of vegetation. It is additionally given off in the exhaust fumes from cars and trucks. Acetylene has a similar chemical structure to ethylene, and produces the same reactions in plants. Acetylene is used during welding, or released from calcium carbide.

Vegetables in mixed storage rooms may be exposed to ethylene if fruit are also present. For example, apples continue to release significant amounts of ethylene even when stored at close to 0°C.

While different vegetables vary in their sensitivity to ethylene, all the effects of ethylene on vegetables are negative. Ethylene exposure increases breakdown of chlorophyll (causing yellowing), reduces storage life, increases sensitivity to chilling injury and can help spread decay. A concentration of 0.1ml/L (0.0001%) can be enough to cause undesirable changes in products such as leafy vegetables.

Ethylene is used commercially to increase ripening and improve colour consistency of mature green tomatoes. Capsicum are non-climacteric, so do not respond in the same way. Trials have shown that some capsicum and chilli varieties do have faster red colour development when ethylene is present, but only if they were already changing at harvest. Even in this case, ethylene exposure is likely to shorten storage life, so costs may still outweigh benefits.

The effects of ethylene on vegetables can be avoided or reduced by: 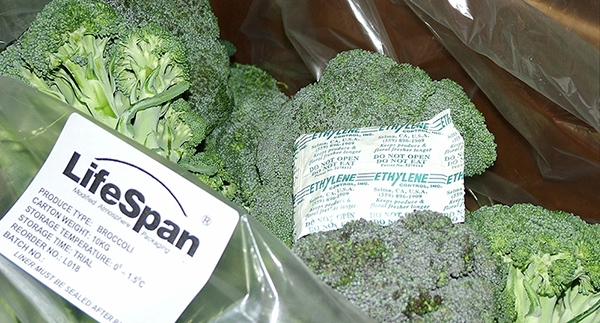 Ethylene removing sachets filled with KMnO4, placed in a carton of broccoli with a 'Lifespan' modified atmosphere liner.

The most common way of removing ethylene from the storage atmosphere involves reacting it with KMnO4. This may be contained in filters placed over cooling units, scrubbers in air delivery lines, or passive sachets which can be added to cartons, as in the example above. In this case, the effects of ethylene are also mitigated using an MAP bag to increase CO2 concentration around the broccoli.

As KMnO4 absorbs ethylene it changes from bright purple to brown. Filters need to be refilled with fresh material regularly to maintain effectiveness. 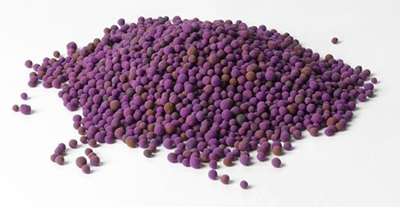 KMnO4 pellets, for use in an ethylene removing filter.
Related Pages