Controlled atmosphere (CA) storage involves active control of O2 and CO2 concentrations in the storage atmosphere. While this can maximise potential storage life, CA systems are costly and may not fit with normal vegetable supply chain practices.

Controlled atmospheres (CA) involve active control of the storage atmosphere to maximise the benefits of reduced O2 and/or increased CO2. This technology is widely used for long-term storage of apples, which can be maintained in good condition using atmospheres of 1 to 3% O2 and 2 to 5% CO2.

The advantage of CA is that it is fully controlled. However, this also increases costs. Specialised equipment is needed to generate the atmosphere as well as monitor it to ensure critical limits for O2 and CO2 are not exceeded. It can take several days to create a stable atmosphere inside an apple store. The store then usually stays closed for many months before it is unpacked.

Such long storage periods are not necessarily suitable for vegetables, which tend to be less seasonal and stored for shorter intervals.

One possible use of CA is during sea freight. Nitrogen can be used to reduce both O2 and CO2 inside a sealed shipping container. During transport, the container can be vented with air in response to an O2 sensor inside the unit, ensuring O2 does not fall too low. While these containers have been used effectively for some fresh products, disadvantages include cost and container availability.

Modified atmosphere packaging uses the respiration of the product to alter the storage atmosphere inside a sealed package. The equilibrium atmosphere that develops is a factor of respiration, temperature, film permeability and film area relative to product weight.

Modified atmosphere storage uses the respiration of the produce itself to reduce O2 and increase CO2. The atmosphere that develops will be determined by the respiration rate of the product as well as the area and permeability of the film. The aim is to produce a stable atmosphere, where the rate of gas movement through the plastic film equals the rate at which O2 is consumed and CO2 is produced.

Designing a MAP system for any product requires understanding of storage conditions and the range of normal respiration rates under those conditions. It is also important to know what atmospheres may be beneficial to the product, and what atmospheres may cause damage. Many products are damaged by high CO2 concentrations. For some products, a CO2 increase of only 2 or 3% can result in internal breakdown. Such products are unlikely to benefit from MAP, no matter how permeable the film. Even if appearance is good, taste and texture can be affected. For example, broccoli stored in MAP has reduced yellowing compared to product stored in air. However, it can develop strong off odours. Although these odours disappear after a time in air, they detract from what otherwise appears a good quality product.

Another consideration is that although some products can look good while still in MAP, they deteriorate extremely fast afterwards. This can be an issue where packages will be opened before retail sale.

Integral plastic films are usually 3–4 times more permeable to CO2 than to O2 whereas microperforated films are equally permeable to both gases. Film selection and degree of microperforation can be manipulated to ensure the atmosphere that develops inside a MAP is beneficial to the product.

Most plastic films are more permeable to CO2 than to O2. This is because gas moves through plastic film by dissolving into the plastic then reforming on the other side of the barrier. This process is driven by differences in gas concentration on either side of the film – a process equivalent to osmosis with liquids through a membrane.

The CO2 molecule is composed of three atoms and has a slightly polar electrical charge, whereas O2, with two equal atoms, does not. This allows CO2 to more easily dissolve into the plastic film than O2. Nitrogen (N2) is even less able to dissolve through a membrane than O2. 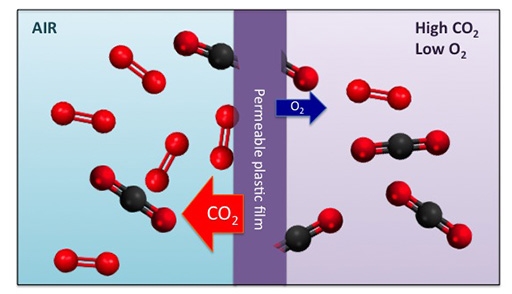 Diffusion of O2 (red molecule) and CO2 (red and black molecule) through a barrier film. Individual gas molecules dissolve into the film itself, then reform on the other side, a process driven by differences in concentration either side of the barrier. 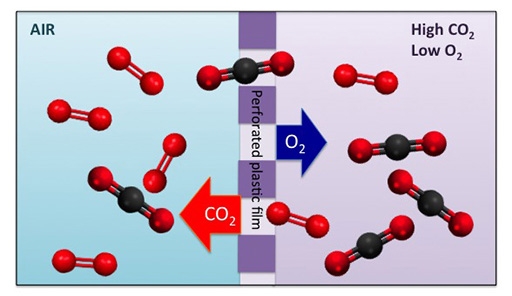 Relative permeability to O2 and CO2 of different types of plastic film, in comparison to their permeability to N2
(Data from V. Siracusa 2012. Food packaging permeability behaviour: A report. Int. J. Polymer Sci. 302029)

Perforated films are different. In this case gas exchange is through holes, so permeability to O2 and CO2 is the same. While there can be some contribution to gas movement by diffusion through the film barrier, this is usually insignificant compared to the much faster gas transmission through the holes. In packages made of micro-perforated films, decreases in O2 will be matched by increases in CO2.

Once the optimum concentrations needed to extend storage life are known, films can be selected to achieve this result at the anticipated storage temperature. For example, storage life of spinach can be extended in an atmosphere of 10% O2 + 10% CO2 — a combination which may be achieved using a micro-perforated bag. In contrast, cauliflower is best stored in 2–5% O2 + 2–5% CO2: a nylon film bag could (theoretically) develop an atmosphere of 3% O2 + 3.3% CO2, making it a suitable material for this product.

One advantage of micro-perforated films is that their permeability is determined by the number of holes created during manufacture. This means packaging materials can be readily tailored for specific products and purposes.

If temperature rises, the resulting increase in product respiration rate is usually greater than the accompanying increase in film permeability. This means high temperatures can cause MAPs to become anaerobic.

One of the major difficulties with MAP is that the permeability of films to O2 and CO2 generally increase only slightly in response to temperature, whereas respiration rates increase a lot more. Polyethylene films can double in permeability with a 20°C increase in temperature. However, over the same temperature interval respiration may increase tenfold or even more.

If conditions are warmer than those for which the package was designed, O2 used for respiration will be greater than O2 transmission through the film and the package will run out of oxygen (become anaerobic). However, if packages are designed to provide a suitable atmosphere when being ‘temperature abused’ they are unlikely to provide significant benefits (in terms of low O2 and/ or high CO2) during normal cold storage.

Package designers have attempted to overcome this limitation by adding patches of materials that are more responsive to temperature, or which increase in permeability when saturated with water. Despite this, MAP remains best suited to applications where temperature can be closely controlled. Concentrations of O2 and CO2 inside a theoretical package made of either LDPE or a microperforated film. After 15 hours both packages have reached equilibrium. That is, where respiration rate is equivalent to the rate of gas diffusion through the film. However, both O2 and CO2 are higher in the microperforated film compared to one made of LDPE. This is due to LDPE's differential permeability to gases.
Related Pages