Until recently (2012), postharvest treatments with the insecticides dimethoate and fenthion were used to provide quarantine security against fruit fly infestation. While preharvest application of these chemicals is still allowed for certain use patterns, they can no longer be applied postharvest to vegetables.

Cold storage is commonly used as a quarantine treatment for fruit crops against fruit flies. Temperatures under 3°C are required for 2 weeks or more. This limits use on chilling sensitive vegetables. 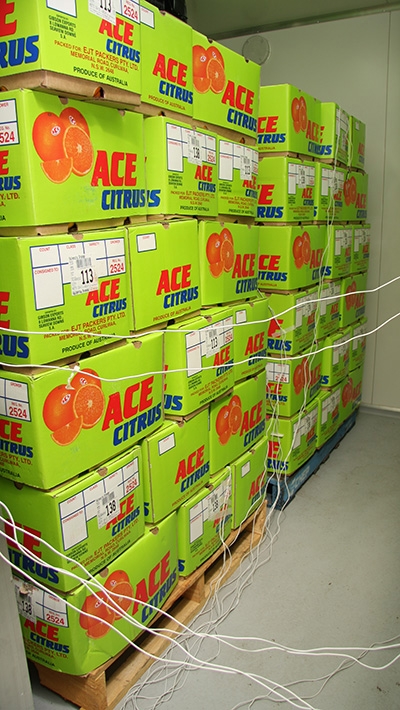 Cold storage is a commonly used method for ensuring that fruit do not contain live fruit fly larvae. Cold disinfestation is accepted by a number of Australia’s trading partners (eg Japan, China, Taiwan, USA) for products such as citrus, stonefruit, grapes and kiwifruit. Cold disinfestation can be done in-transit, with data loggers used to provide proof of treatment.

Protocols may be on a sliding scale according to temperature. So, for example, Australian mandarins must be held at <1°C for 15 days, <2°C for 18 days or <3°C for 20 days in order to access Japan.

Such treatments are very conservative. Research on various fruit crops have all found ≥98% mortality after eight days at 3°C. A project on disinfestation of capsicums found that no fruit fly of any life stage survived when held at 3°C for 10 days. However, the shortest currently accepted protocol requires 14 days at <3°C.

Cold disinfestation treatment of citrus to provide quarantine security against Queensland fruit fly. Cables are from multiple data-loggers, placed through the load.

There are currently no cold storage protocols for vegetables for a number of reasons:

Heat treatments are used as a quarantine treatment against fruit flies in chilling sensitive fruit crops. They are expensive, technically difficult and can damage the product. 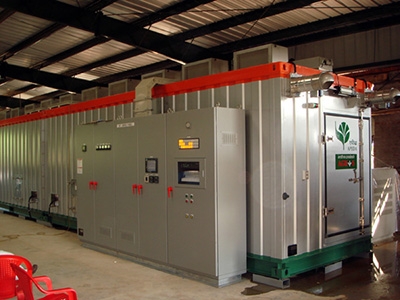 Heat treatments are also primarily used to ensure products are free of live fruit fly larvae. They can be applied through water, air or vapour. Most require exposure times of 30 minutes to several hours at 40–50°C. Heat treatments have generally been focused on chilling sensitive, high-value fruit crops such as mangoes, avocados and papaya. Treatments have also been developed for vegetable crops including zucchini, squash, and tomatoes. However, none have developed into commercial protocols.

Difficulties with heat treatments include:

High CO2 and low O2 can be combined with other quarantine measures to reduce treatment times. No quarantine treatments using this method are currently accepted.

Although reduced O2 or increased CO2 are not effective at killing insect pests when used alone, they can improve the efficacy of other measures. So, for example, high CO2 combined with cold storage can reduce the time needed to achieve Probit 9 mortality by several days.

However, the gas concentrations needed are extreme; an atmosphere containing <13% O2 or >7% CO2 is deadly to humans, but insects can survive <0.5% O2 and >50% CO2. The best effects are gained using atmospheres containing >90% CO2. Such atmospheres raise issues with worker health and safety as well as being expensive to measure and maintain. They can also damage the product.

In addition, regulators may be reluctant to accept treatments that rely on more than one measure, as they are relatively difficult to verify. There are currently no commercial protocols using modified atmospheres to kill pests.

There are a number of different fumigants, of which methyl bromide is still widely accepted. It is cheap to apply, fast and can be used as a generic treatment against a range of pests. Recapture technology can help mitigate environmental concerns.

Fumigation has a number of advantages in that it is relatively inexpensive, fast, leaves few residues and can be conducted on packed product so long as materials are vented. The fumigant methyl bromide (MB) remains the main generic quarantine treatment allowing international and interstate trade in fresh produce. So far, no other product has been found to be as effective as MB against fruit fly as well as other insect pests.

Although the Montreal Protocol banned most uses of MB due to its ozone- depleting properties (effective January 2005), quarantine treatments currently have a critical use exemption. Despite this, use is likely to become increasingly restricted; in 2010 the European Union banned quarantine use of MB on both local and imported products. Fumigation using a shipping container equipped with MB recapture equipment. This removes MB from the exhaust air after treatment.

The emissions of MB responsible for ozone depletion can be greatly reduced using recapture technology. After fumigation, the room or container air is pumped through activated carbon filters that absorb the MB. Once saturated, the carbon filter material can be deep buried, where the MB contained is naturally destroyed by soil bacteria. The carbon can, alternatively, be chemically treated to reduce it to non-toxic compounds or destroyed by pyrolysis.

The USA has set a target that all MB used for quarantine purposes should be recaptured by 2020. Similar targets exist in other countries, including New Zealand.

Phosphine is another common fumigant widely used against stored product pests (eg weevils in grain). It has the advantage that it can be applied at low temperatures. However, exposure times are much longer than those required for MB, being days rather than hours. Phosphine is also extremely toxic to humans and potentially explosive. A non-explosive formulation of phosphine with CO2 (ECO2FUME) has been shown to be effective against Qfly in citrus when applied for 48 hours.

Another alternative to MB is ethyl formate. This fumigant kills surface pests such as thrips and mealybugs yet is very safe for humans. Unfortunately, the high doses needed can damage vegetable skins, causing discolouration and pitting.

A similar problem exists with ethane dinitrile, a relatively new fumigant recently tested on vegetables. A dose of 30g.m EDN for two hours at 15°C resulted in 100% mortality of fruit fly larvae in chillies, zucchini and capsicum. Unfortunately, doses of 5g.m or more caused significant damage, including softening, pitting and rots, to all vegetables tested (tomatoes, capsicum, squash, cucumber and zucchini).

Hydrogen cyanide (HCN) is sometimes used as a fumigant against surface pests such as mealybugs and aphids. It is used in some countries to treat bananas, pineapples and other tropical fruit. However, HCN is extremely toxic, being potentially deadly to humans through skin contact alone. It also causes skin damage to many fresh products.

Irradiation is fast, accepted as a generic treatment for fruit fly and leaves no residue. However, there is currently only one commercial irradiation facility in Australia and customer acceptance is limited.

Irradiation involves exposing the product to ionising radiation. This is usually from a radioactive source (cobalt-60), but can also be produced electronically. Irradiation may not kill insects immediately, but stops them from continuing to develop and reproduce.

A dose of 150 Gy is accepted by some countries (including USA) as a generic treatment for fruit fly. This treatment has been approved by FSANZ for capsicums and tomatoes, based on studies showing nutritional qualities were unaffected.

Irradiation has significant advantages, particularly, the acceptance of a generic dose against insect pests. It leaves no residues, is fast, and can be applied to packed product. However, many export markets, including Japan, Taiwan and the European Union, do not permit irradiation. Where it is accepted (eg New Zealand) products must be labelled as such, which limits consumer acceptance.

Other barriers to use of irradiation include cost and logistical difficulties; the only Australian commercial irradiation facility is in Brisbane. The delay in insect mortality also creates issues, although a new ELISA test that can detect changes in irradiated insects may help overcome this barrier.