Most vegetables freeze at just below 0°C. Freezing damages cells, allowing the contents to leak out. Tissue that has been frozen can have a water-soaked or dehydrated appearance. 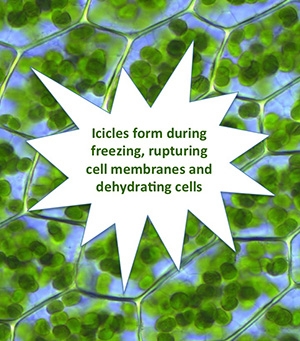 The temperature at which products freeze is a function of the concentration of dissolved solutes—such as sugar—within the cells. Pure water freezes at 0°C. A product such as lettuce, which is mostly water, will freeze at approximately –0.2°C. In contrast, the high sugar content (up to 10% at harvest) of products such as carrots and sweetpotato, means they may not freeze until temperature falls to –1.8°C.

When products freeze, water forms into ice crystals within and between cells, resulting in dehydration of the cells themselves. Expanding ice crystals can also pierce the cell walls. When the product thaws the cells collapse, resulting in the water-soaked appearance and loss of structural integrity typical of freezing injury. Freezing can effectively ‘kill’ the product, which is unable to resume its normal metabolic activity. Damage is most likely when the vegetable freezes slowly, resulting in the formation of larger ice crystals. Food processing facilities producing frozen vegetables rely on rapid blast freezers to limit the size of ice crystals and maintain the integrity of the frozen product.

A few vegetables, such as cabbage, have some tolerance to freezing and can recover if defrosted slowly. 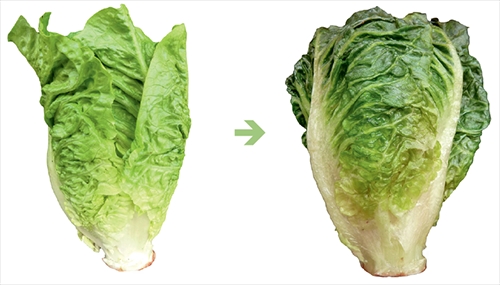 Fresh (left) and frozen carrots and lettuce, showing the dehydration and water- soaking symptoms that are typical of freezing injury.

Chilling injury can occur when warm climate vegetables are held at low temperatures. Symptoms include pitting, water loss and rots. Damage may not be obvious in storage, but appears when the product returns to warmer conditions.

Chilling injury is most commonly a problem for fruit and root vegetables that originate in tropical or warm temperate regions. It occurs when these products are held above their freezing point but below a temperature at which physiological damage occurs. The reasons why chilling injury occurs are still not well understood, however, it appears to relate to malfunction of cellular membranes and disruption of normal processes within the cells.

Injury is not simply an issue of temperature, but also of exposure time. Most chilling sensitive products can withstand limited exposure to temperatures below their normal temperature threshold, but as storage time increases damage becomes more likely.

Symptoms of chilling injury may not be obvious during storage, but develop after products are returned to warmer temperatures. Common symptoms include the development of sunken, pitted areas, water-soaked lesions, internal browning, and accelerated development of surface rots and decay. Fruiting vegetables can fail to ripen normally, as well as develop off flavours and odours. Weight loss is often rapid, with products deteriorating quickly once on retail display.

Susceptibility to chilling injury can be affected by growing conditions, variety and maturity as well as postharvest treatments such as delayed cooling or short exposures to heat. Hot water treatments can delay the onset of chilling damage.
Capsicums were treated under a shower of 20°C (left) or 55°C (right) water for 30 seconds before storage at 2°C for 6 weeks. For chilling sensitive products, selecting the best storage temperature is a balance between the development of low temperature damage and the rots, yellowing and water loss that can occur at warmer temperatures.

For some vegetables, storage life is longer at temperatures that can cause chilling damage than at ‘safe’ temperatures, where rots, yellowing and water loss become major problems. Capsicums are an example of this, with storage life maximised at close to 0–2°C in spite of their chilling sensitivity.