For non-chilling sensitive products, quality is usually best maintained when vegetables are held just above the temperature at which they freeze. Such temperatures are often used as recommended optimums for transport and storage. This is often 0°C ± 0.5°C.

In reality, it is very difficult to maintain products at close to freezing point. In order to keep products cool, the delivery air temperature inside a cool room must necessarily be lower than the temperature at which the room is set. Depending on how the room has been designed, the difference may be 1, 2 or even 3°C. For example, in a room set at 5°C the delivery air needs to be 2–4°C in order to cool the room contents. A room can only be maintained at 0°C if the delivery air is below zero. Products placed directly in the delivery airflow are therefore at risk of freezing.

In addition, evaporation of water from products further cools them, especially if humidity is low. So, evaporation from leaves in a cold room running at exactly 0°C can potentially reduce the product temperature to -0.3°C— low enough to result in freezing injury.

For many products, the risks posed by freezing outweigh the potential benefits to storage life of such low storage temperatures. For this reason, products such as leafy vegetables and lettuce are often stored at 2°C or higher.

Temperature affects metabolic activity and storage life, with small changes usually having most effect when temperatures are low.

There are usually significant benefits in keeping products as cool as possible. Good temperature control is important during cold storage, as the effects of temperature on quality and storage life are not constant. So, a reduction of 5°C will have little effect when products are over 20°C, but a major effect on quality if products are below 10°C.

The reason changes in temperature are so important is due to metabolic activity. The rate of physiological reactions within plant tissue increase exponentially with rises in temperature. This relationship is described using the ‘temperature quotient’ or Q10. The Q10 was proposed by the Dutch chemist Jacobus Henricus van’t Hoff, who determined that the rate of chemical reactions approximately doubles for each 10°C rise in temperature:

For many biological processes the Q10 actually varies considerably, and is highest between 1 and 10°C. This is important, as high Q10 values can indicate that small changes in temperature will have major effects on quality.

For example, in the case of broccoli:

Just as low temperature reduces the rate of deterioration of fresh vegetables, it also reduces growth of microorganisms. Most postharvest pathogens grow optimally from 15 to 25°C. A few, notably grey mould (Botrytis cinerea), can continue to grow at 0°C. Although most bacteria and fungi can survive exposure to low temperatures, their growth rate is only a fraction of that under ambient conditions. 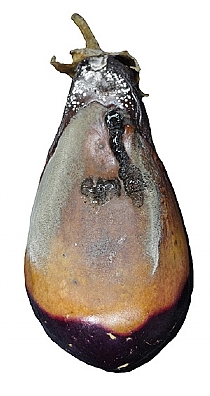 Storage temperature affects flavour. Low temperature is critical for preserving sweetness in products such as sweet corn and peas, but can cause undesirable sweetening in potatoes.

Many vegetables contain sugars, such as fructose and glucose, and starch. Plants can convert convert sugars into starch, or vice versa, in order to store energy for later use (as starch) or fuel metabolic activity (with sugars). These compounds therefore exist in equilibrium:

Storage temperature can alter the balance between starch and sugar in vegetables such as potato, sweetpotato, peas and sweet corn.

For root and tuber vegetables, such as potato and sweetpotato, storage at low temperature tends to increase conversion of starch into sugar. This affects colour and flavour, and can mean fried products brown more quickly due to caramelisation. Conversion of starch into sugar increases below around 10°C for potatoes and 15°C for sweetpotato, depending on variety. This has negative effects on quality (particularly for potatoes), but usually reverses after a period at warmer temperatures.

In contrast, high sugar is strongly preferred for products such as peas and sweet corn. It is important to cool these products as quickly as possible after harvest to prevent sugars being either converted to starch or lost through respiration. For example, sweet corn can lose 60% of the sugars that give it flavour within 24 hours of harvest if it is kept at 30°C. This is partly due to respiration but also caused by conversion of sugars into starch.