Just as we need oxygen to stay alive, so do vegetables.

Respiration is a process common to all living cells, whether plant, animal or fungi. It is the process by which oxygen (O2) breaks down carbohydrates or organic acids. This process produces energy, as well as carbon dioxide (CO2) and water. Some energy is released as heat, but most is used to maintain the integrity of the plant cells and keep them alive.

Respiration processes can be summarised as;

Respiration rate is often linked with storage life as it indicates metabolic activity. Reduced respiration is a key benefit from cooling vegetables after harvest. 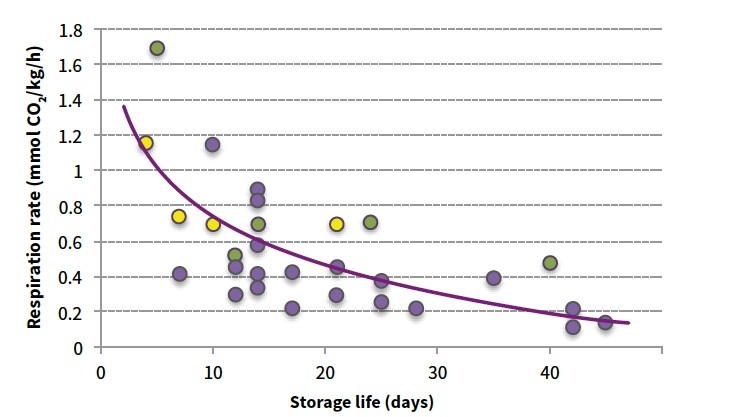 Some of the energy produced by respiration is released as heat. If this is not removed then products can warm up. This reduces quality and burns up the sugars and acids that help give vegetables their flavour.

Respiration can use up the stored sugars and acids that give vegetables flavour. As vegetables generally contain low quantities of sugars and acids to start with, even small losses can impact quality. For example, respiration of broccoli florets during storage for three weeks at 4oC can use up half to two-thirds of their stored sugars, a change closely related to yellowing and flavour loss.

Respiration not only powers plant cells, it produces heat. If vegetables are stored without effective cooling or ventilation, then respiration causes them to warm up. This can be a particular problem for product that has not been properly cooled and is then stored in unvented boxes or lined containers. Heating further increases respiration rate, which then further increases heating, a circular process inevitably leading to deterioration and decay.