This page describes what vegetables are, and the different components that go together to form them. Where the vegetable comes from on the plant affects its postharvest qualities, especially how it changes after harvest. Vegetables are composed of plant cells. These come together to form the different types of structures that we grow and the components that make them good to eat.

What is a vegetable?

Vegetables can be from any part of the plant. Their origin as a root, shoot, leaf, flower bud, fruit or other part affects how easily they can be handled and stored.

Unlike fruit, which are derived from flowers, vegetables cannot easily be defined. Vegetables are derived from many different parts of plants. Some are actually fruit; others are buds, leaves, stems, roots or storage organs. Where the vegetable comes from on the plant affects how well it stores and many of its sensory qualities.

Vegetables can generally be grouped into three categories: 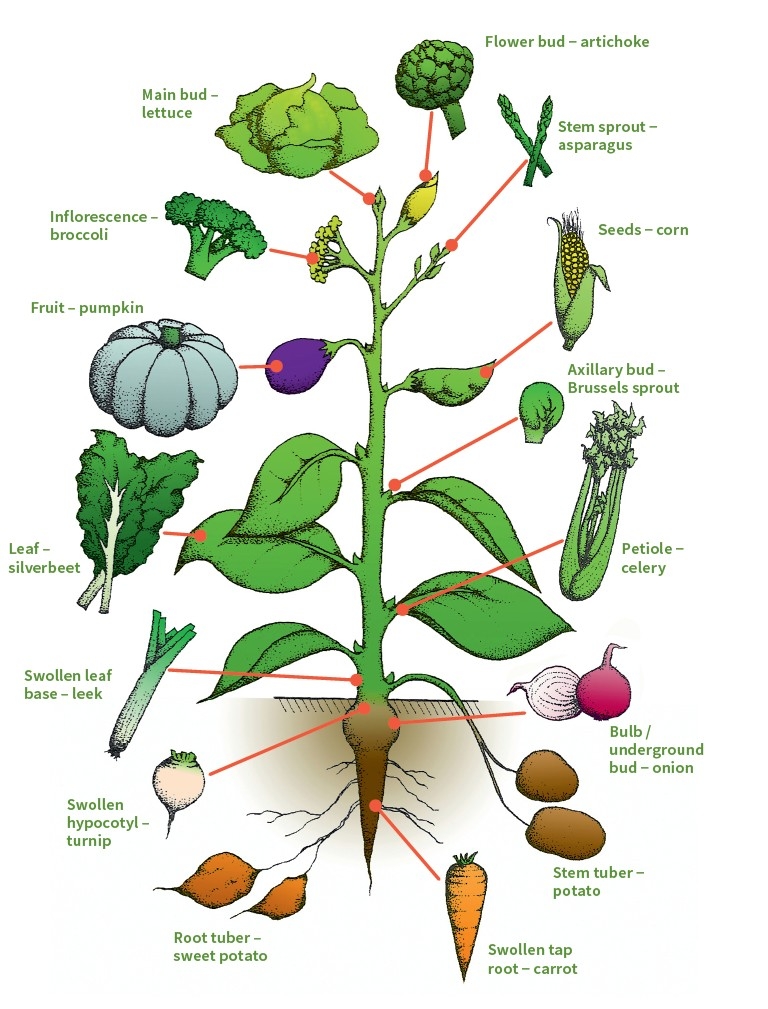 The origin of vegetables affects how they are best handled after harvest. For example, vegetables from above the ground are more likely to have waxy skins to protect them from water loss. Roots and tubers do not have such protection, so may require high humidity to limit dehydration. Seeds necessarily contain stored energy in the form of sugars or carbohydrates. Buds and shoots generally have few stored reserves and are developing rapidly, so need careful handling to preserve them after harvest.

Harvested vegetables are still alive. However they have been removed from their sources of water and nutrients, so are living on stored reserves. How quickly these reserves are depleted can determine storage life.

When a fruit is harvested, it could be seen as continuing its natural ‘purpose’. That is, fruits are produced by plants in order to be eaten, and will eventually detach by themselves if not actively harvested.

Unlike fruit, most vegetables are not adapted to exist apart from the whole plant. Once harvested, vegetables are cut off from their source of water and nutrients. Without sunlight, they are unable to photosynthesise and are usually removed from the protection of soil or foliage. Many fruiting vegetables − such as cucumber and eggplant − are harvested while immature. These ‘baby fruits’ lack the sugar reserves and/or protective skins of fruit such as apples or bananas.

With the exception of vegetables which are mature fruit, bulbs or storage organs (pumpkin, onions, sweetpotato, etc.), most vegetables are on the path to senescence and death from the moment they are harvested. The role of postharvest management is to delay deterioration, maintaining freshness, nutrition, flavour and texture until vegetables reach the end consumer.

The water pressure inside plant cells is what keeps vegetables firm and crisp. Damage to cell membranes allows compounds kept separately inside the cell to combine and the cell contents to leak out. This results in brown, soft and/or water-soaked areas.

Like other living things, vegetables are made up of cells. There are many different types of cells within even a simple vegetable, and each has different functions within the plant.

Plant cells have a fairly rigid cell wall, composed mainly of cellulose, lignins and some proteins. Calcium is critical in the formation of cell walls. If calcium is deficient (due to low soil levels or growth faster than the rate of transport within the plant) the growing tips of fruiting vegetables such as zucchini and eggplants will lack structural integrity and can break down. This is the cause of blossom end rot.

Adjacent cells are glued together by a layer of pectins. A series of channels (plasmodesmata) allows exchange of various substances between cells.

The cell contains a liquid ‘soup’ called cytoplasm. Within the cytoplasm float various structures and organelles, each of which has a specific purpose. 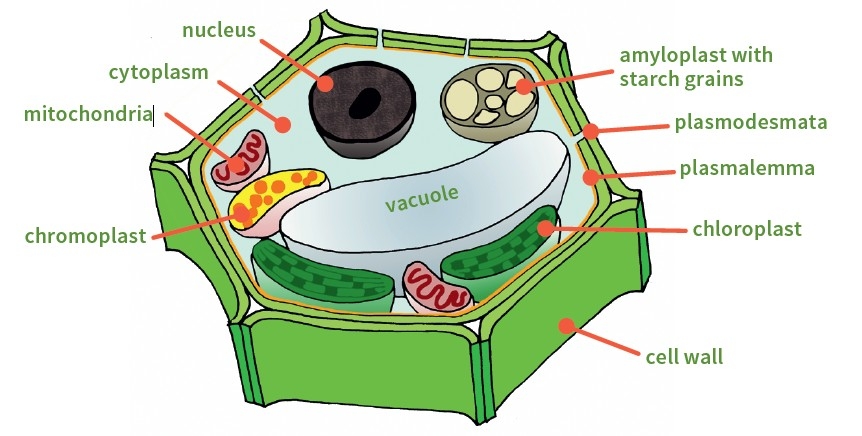 A plant cell showing some of the organelles and structures.

If the cell walls are broken—by freezing or physical injury—then the turgidity of the cells is lost and the contents leak out, resulting in soft, water-soaked tissue.

Breaking or crushing cells also allows compounds normally held in separate parts of the cell to mix. For example, phenols held in the vacuole mix with oxidising enzymes in the cytoplasm, turning them brown. This is what causes the brown colour in bruises and on cut surfaces. Lowering the pH (with citric acid, for example) inhibits this reaction on cut surfaces, reducing browning.

There are many types of plant cells and they perform different functions for the plant. How the plant cells are arranged and whether the vegetable has a thick epidermis and/or waxy cuticle strongly affects ‘keeping’ quality and water loss.

Plant tissues contain many different types of cell, as well as air spaces. These include:

Cross section of a leaf, showing some of the cells that can be present.

The structure of the epidermis and the number of lenticels and stomata govern how quickly a vegetable will lose water. For example, solanaceous fruiting vegetables (eggplant, capsicum, tomato, etc.) do not have lenticels or stomata. This reduces the rate of water loss from the fruit. Cucumbers have numerous lenticels, while many leafy vegetables have large numbers of stomata across their surface, so both lose water rapidly. The thin epidermis of a zucchini presents little barrier to water loss compared to the thick epidermal layer and waxy cuticle of a pumpkin.

The veins (vascular bundles) that transport water and nutrients can also conduct diseases. Browning of the vascular system due to bacteria or fungus can result in stripes or spots. Brown striping of celery stems, or reddish brown streaks inside a cut-open eggplant, show where the veins have been infected.

Vegetables are mostly water. They also contain carbohydrates, dietary fibre, protein and many vitamins and nutrients that are important for human health.

Vegetables are mostly made of water. Lettuce, cucumbers and leafy vegetables contain about 95% water, so only 5% of their mass is dry matter. Hard vegetables like carrots and pumpkins have around 12–15% dry matter, sweetpotato are close to 20% dry matter, and cassava is one of the highest at 35–45% dry matter.

Harvesting when water content is highest is an obvious way to both increase yield and ensure products have firm texture.

After water, the next most important component in vegetables is carbohydrate. Carbohydrates can be present as starch, sugars and dietary fibre. Starch is mainly found in storage organs, such as potatoes and sweetpotato. Starch is used by the plant as a concentrated, ‘long-term’ fuel source. It needs to be broken down into sugars in order to provide energy to cells (See the section on Temperature for more on this).

The main sugars that are present are glucose, sucrose and fructose, although not every product contains all three. Although more usually associated with fruit, sugars are an important component of flavour in vegetables such as carrots, sweet corn and peas.

Dietary fibre compounds include cellulose, lignin, pectins and other substances. Dietary fibre may be soluble or insoluble, with soluble dietary fibre now believed to have particular benefits for health . Dietary fibre cannot be readily broken down by the digestive system, and most is simply excreted. However, consumption of dietary fibre is now considered an important health marker and is actively promoted by many health professionals.

Protein is also found in vegetables, although in small amounts. Brassica vegetables and legumes (peas and beans) are generally the best protein sources, containing around 3–5% protein.

Other components include vitamins, minerals, phenolic compounds, volatiles and anti-oxidants. Although also present in relatively small quantities, these compounds are likely involved in many of the health benefits demonstrated for diets rich in vegetables. For example, beta-carotene (found in carrots but also sweetpotato, pumpkin and many leafy greens) converts to vitamin A in the body and has benefits in terms of healthy skin, eye health and improved immune system. The sulphur compounds found in brassicas and onions have been associated with reduced risks of certain cancers, as has lycopene, responsible for the red colour of tomatoes.