Relative humidity can be maximised in cool rooms by ensuring the delivery air is close to the desired temperature, reducing temperature fluctuations due to defrost cycles, avoiding opening and closing the room, and adding humidifying vapour if necessary. 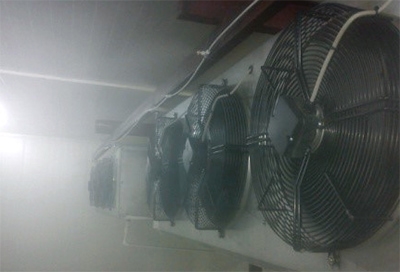 The main method of reducing the vapour pressure deficit (VPD), thereby also reducing moisture loss, is to increase RH in the cool room air. Humidifying storage rooms is relatively simple, as all that is required is to add water, usually as a fine mist. However, adding mist can also lead to soft, damp packaging, floor puddles and increased disease if products become wet. Moreover, adding free water at rooms close to zero increases frosting on the refrigeration coils, leading to longer and more frequent defrost cycles.

One of the best ways to increase RH in the storage environment is to design the cooling system so that the delivery air is only slightly colder than the setpoint for the room. This minimises the difference in temperature between the coils and the produce, and so avoids excess condensation and/or drying of the air. Using large coils with a high surface area for heat exchange can help achieve this.

Rooms that are poorly sealed, frequently opened or vary significantly in temperature will have lower and more variable humidity than those that are more accurately controlled. In the example shown below, both rooms have been set at 1.5°C and fluctuate by approximately ±0.5°C overall. However, the larger and more frequent temperature changes in room 2 result in lower and more variable RH inside the room, potentially causing condensation on and/or dehydration of the produce.

Temperature (—) and humidity (—) in two different cool rooms both set at 1.5°C. In room 1 (left), temperature is relatively stable, so RH remains at 85-90%. In room 2 (right), more frequent and larger temperature fluctuations results in room RH varying from 76 to 90%. (Data recorded at 10-minute intervals in both cases.)

Product characteristics such as size, shape, number of natural openings and skin features affect how easily the product will lose moisture.

As well as the magnitude of the VPD, many other factors will affect how quickly a vegetable will lose moisture. These include:

Air movement around vegetables should be minimised to avoid excess moisture loss.

The surface of produce has a thin layer of stationary air around it — the ‘boundary layer’. Within this layer the vapour pressures of the air and the product will be in equilibrium. The boundary layer is thickest for products with hairy skins, such as the Asian gourd ‘chi qua’ or ‘hairy melon’. Uneven surfaces, such as found on bitter melon (fu qua) also increase the boundary layer.

A hairy skin, such as found on the chi qua, or 'hairy melon', creates a boundary layer of air over the fruit surface, reducing moisture loss by the product.

Plastic packaging can be an effective barrier to moisture loss, but it is important to avoid condensation on the products. Natural packaging such as wood and cardboard can absorb moisture from the product or storage environment. Packaging has a clear role in increasing the RH around a product, thereby reducing the VPD. Packaging holds products together, restricting air movement around individual items. This increases the boundary layer and so reduces water loss. Even a mesh bag may reduce dehydration, simply by interfering with air movement.

Plastic films are very effective barriers to water loss. However, it is important to avoid condensation inside the package that can increase rots and diseases. Films made of ultra-thin, plasticised materials or which have anti-fog coatings or microperforations have reduced risk of internal condensation while still protecting against moisture loss.

Waxes and other fruit coatings can have a somewhat similar effect to packaging materials, especially if the material blocks openings in the vegetable skin. In this case there is no issue with condensation. Shrink wrap, which is commonly used to package telegraph cucumbers, can also provide RH control without significant condensation. In this case the plastic is in close contact with the produce skin. Condensation does not occur inside the wrapping because the film and the product are at the same temperature. Shrink wrapping has been shown to be effective for a number of different products, however, cost and consumer resistance are barriers to use.

Some types of packaging can also have the opposite effect on water loss in produce. Wooden bins or boxes, paper and cardboard can all absorb significant amounts of moisture even before they appear damp. For example:

Storing in a high RH environment can reduce moisture absorption by bins, although this is not always feasible. Waxed, varnished or plastic-coated cardboard is less moisture absorbent than raw cardboard.

Even if the atmosphere around a product is close to saturation, some moisture loss will still occur due to metabolic activity and respiration.