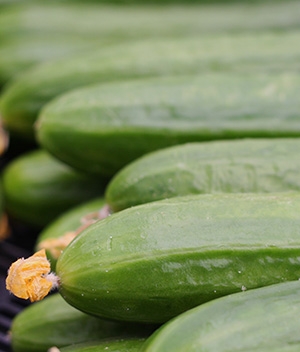 Cucumbers are immature fruit, harvested before the seeds develop and harden. Some cucumber varieties have a relatively hard skin, whereas others (Lebanese cucumbers) have a thin skin which is easily damaged.

Cucumbers should ideally be harvested when cool, dry and fully hydrated, such as the early morning. They need to be cooled below 15°C as soon as possible to minimise water loss. Lebanese cucumbers lose water 3–4 times faster than hard skinned varieties such as green field cucumbers.

Cucumbers are difficult to store. Temperatures 15°C and higher result in rapid yellowing and onset of disease. However, temperatures below 5–10°C result in chilling injury.

Susceptibility to chilling injury is strongly affected by variety and growing conditions. Sensitivity can be reduced by staged cooling, short hot water treatments, and use of plastic packaging.